Mining cryptocurrencies on mobile made easier by PLC Ultima 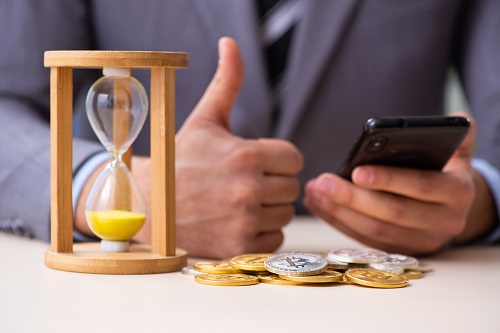 Mining bitcoin, or any other cryptocurrency, on a personal computer is no longer feasible, but new technologies make the process of creating new coins accessible again. One of these new technologies, developed by the team at PLC Ultima is coinage.

As you will discover in this article, this new technology is available even on simple cell phones.

Mining in the world of cryptocurrencies is the process of solving complex mathematical computational problems using specialized hardware, video cards or ASICs.

Mining machines compete with each other to be the first machine to solve the problem, as the first one that finds the solution receives the rewards. The more computers involved in the mining process, the more complicated the competition between miners. The level of competition can be measured by the “Hashrate”, an indicator that reflects the number of attempts being made per second to solve the problem.

In October, the Hashrate behind the Bitcoin network reached its highest point in history, reaching 321.15 exahash per second. This means that competition between Bitcoin miners is getting tougher and tougher, and it is currently unavailable to small miners, limiting this lucrative niche of the cryptocurrency industry to just a few investors who already have many millions in their pockets.

This is how small miners got kicked out of the mining game.

Another type of mining, based on the Proof-of-Stake algorithm, was supposedly created to solve this non-accessible mining problem. In PdP networks, blocks of transactions are sent to the blockchain through validators, which are chosen not for their computational power, but rather for the amount of coins sent and locked in a specific address.

In September 2022, Ethereum, the second largest cryptocurrency by market cap, switched its mode to PdP, and miners with their graphics cards and ASICs were replaced by validators. Ethereum’s blockchain network now consumes 99% less electricity compared to its Proof-of-Work version on the network.

But even then, smaller investors face limited opportunities. To become a validator, you need to freeze 32 ETH worth $38,000 USD in a specific smart contract. Therefore, small miners remain at a disadvantage even on PdP networks.

If global adoption is what the crypto world dreams of, then it is necessary to reinvent mining so that the barrier to entry lowers so that millions of potential users can enter the industry. Otherwise, the dream of a decentralized world with available financial services will only be composed by a small number of enthusiasts.

Like other decentralized systems, PLC Ultima depends on the active participation of its community. It is the crypto community that ensures the functionality of the blockchain network, completing transactions in blocks, writing blocks to the network, etc.

To maintain a high level of decentralization, the PLC Ultima ecosystem team created a technology called Coinage. It allows everyone to be an active member of the crypto community without having to buy expensive mining equipment or lock up their coins worth tens of thousands of dollars.

To turn the mobile phone into a fertile farm, the user needs to install two mobile applications (Ultima Farm and Ultima Wallet), register in the system and replenish the wallet with a random number of coins from the Ultima PLC ecosystem. It’s similar to the way the Ethereum blockchain works. But there is a big difference.

There is no minimum threshold to participate in the minting process in the PLC Ultima ecosystem.

It is possible to start mining with any amount of coins. Furthermore, while coins need to be frozen for participation in the Ethereum network, in the PLC Ultima network there is no blocking of funds: the user’s coins remain under the user’s full control. The user is the sole owner of all access keys to the wallet and all coins within it.

Just like blood in the human body, life in the PLC Ultima ecosystem is carried by two liquid assets called PLCU and PLCUX coins. Both currencies perform critical infrastructure activities and complement each other.

PLCU is used as a currency for transferring value and paying fees on transactions. It is a deflationary currency, with all fees paid with PLCU being burned to prevent secondary market inflation.

PLCUX, on the other hand, is used to generate new coins. Even though both coins are being minted, only PLCUX is available for minting by new users.

Rewards are distributed automatically through a smart contract, and the distribution process is free from any kind of manipulation.

All of the new user engagement and nurturing mechanisms that have been implemented in PLC Ultima explain why the ecosystem is growing so quickly in both the number of users and applications on the blockchain. The ecosystem is already home to approximately a dozen fintech services with a base of thousands of users, including the very high limits PLC crypto debit card, crowdfunding platform Platin Hero and digital marketplace PlatinDeal.

Learn How Bitcoin’s Price Has Changed Over Time

On-Chain Financing – What is it and How Does it Work?

Artificial Intelligence and Bots are Now Growing Our Food

zkSync Is About to Launch Its Mainnet 2.0. Here’s What to Expect