BTC Price Rises as It Reclaims the $22.7K High 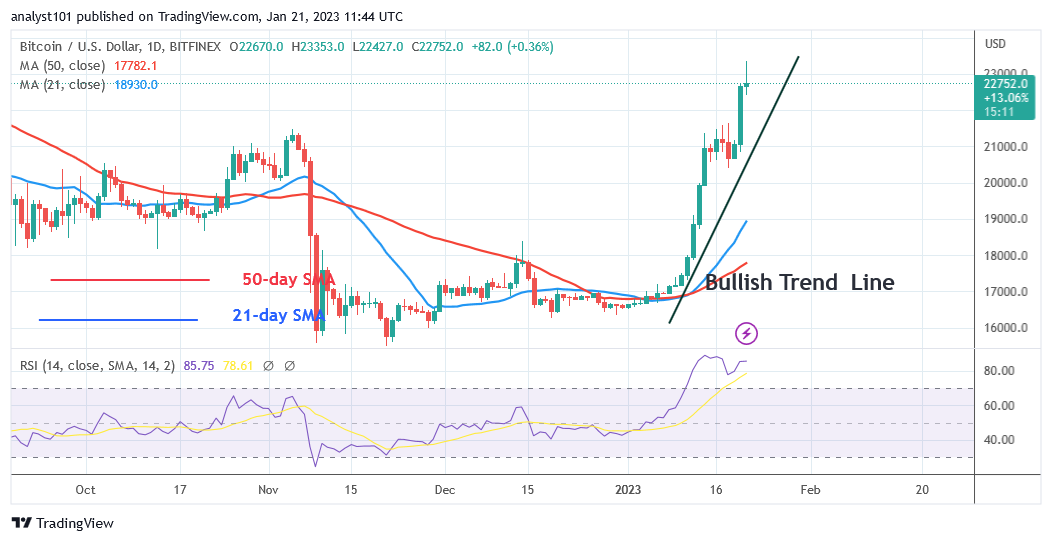 The largest cryptocurrency asset has now resumed the second stage of its upward momentum as it reclaims the $22.7K high. On January 20, the price of BTC/USD recovered after breaking through the resistance level of 21,500. Bitcoin price increased to a peak of $23,353 before declining. It has broken through the $22, 794 resistance level. It is currently trading at $22,788 as of press time.

The price of Bitcoin (BTC) has risen to the $23,000 resistance zone as it has maintained its upward trend. The BTC price then fell to its previous low on September 13, 2022. Since the start of the bearish trend, the historical price level of $22,794 has not been tested or broken. The bullish momentum is currently being attempted to be maintained by buyers above the current price level. At the most recent high, there was a strong rejection. Bitcoin has entered the overbought zone far and wide as a result of the recent price recovery. The overbought state of the asset has been overcome by Bitcoin thanks to the market’s strong trend. In a similar vein, buyers will need to push and maintain the price above $22,794 to indicate the start of the uptrend once more. After that, the BTC/USD pair might begin its ascent toward $25,212.

Crypto Twitter users immediately made fun of Tucker Carlson for making claims without any backing. Controversial an intriguing conspiracy theory advanced by Fox News host Tucker Carlson attempts to link Canadian and American airline delays to a rise in Bitcoin prices. In his theory, the US government may have purchased a significant amount of Bitcoin to pay the ransom for the computer outage that resulted in thousands of flights being grounded on January 11. He did not, however, offer any supporting data for his assertions. The U.S. government already has a significant amount of confiscated Bitcoin, the government would purchase it over-the-counter if it did, and because Bitcoin is traceable and transparent, large ransoms are more likely to be paid in Monero, according to other arguments made against the theory on Crypto Twitter.

Despite this, the price of BTC is currently consolidating above the current support as it reclaims the $22.7K high. The historical price level for September 13 is $22,700. Buyers were unable to maintain the bullish momentum above the recent high from September 13 through November 2022. In a bear market, sellers are better off. The price of Bitcoin is rising right now as buyers try to retake these levels.

While this was going on, the price of BTC continued to rise, reaching a high of $23,353. In a similar vein, other cryptocurrencies have continued to rebound. The MEMEG coin is useful for traders because it offers high rates of return on investment. The Play-to-Earn guild with the fastest growth this year is Meta Masters Guild (MEMAG). It is likely to outperform all other Web3 mobile gaming guilds. It is feasible to create intriguing and entertaining video games that utilize NFTs. Members of the community are rewarded for their investments and speculation there. The MEMAG presale is ongoing and close to $ 1 million has been raised so far.

Ethereum price technicals hint at 35% gains versus Bitcoin in 2023