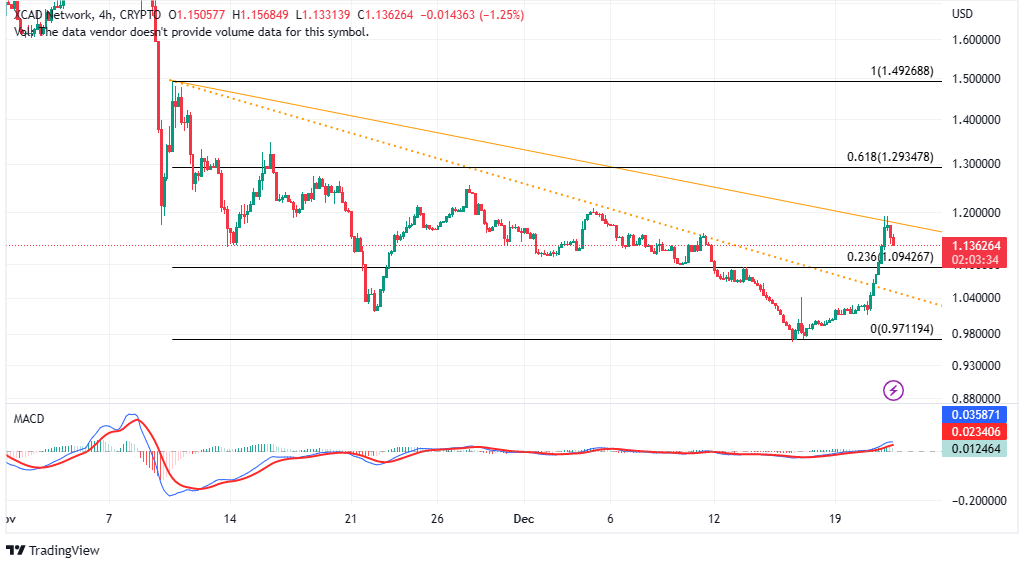 Like other crypto markets, XCAD Network price lost a significant chunk of its value during the 2022 bear run. Considering the token hit a new all-time high of $9.06 in January, it is down 87.2% to trade at $1.14 at the time of writing.

XCAD Network is a cryptocurrency network harnessing the value of content creator audiences through tokenization. With XCAD Network, both the creator and the viewer benefit.

Over the last few weeks, XCAD Network has been running Twitter campaigns while announcing new content creators. On December 16, the team released an update about XCAD’s new egg system targeting Web2 users for NFTs. An earlier update talked about over 100 content creators onboarded on the platform bringing a total of 545 million YouTube subscribers.

XCAD Network is also very active on social media despite the crypto market taking a hit this year. They keep the community engaged through frequent updates, encouraging discussion and interest.

Users will, from December 22, mint Egg NFTs in addition to launching the first-ever Fan Token. XCAD Network’s Fan Tokens allow content creators to monetize their work efficiently. Viewers are rewarded in the same token for the time they spend watching.

XCAD Network price may have bottomed at $0.97 following a year dominated by frequent declines. A seemingly unstoppable bullish momentum has sustained XCAD in a northbound move that almost tagged $1.20 earlier on Thursday.

For traders who followed the XCAD Network price performance in the last couple of weeks, the breakout above the lower falling trend line (dotted) confirmed the uptrend. Long orders entered marginally above this level and flipped profitable immediately, with a possible exit near $1.20.

Overhead pressure is mounting on XCAD Network price, which may explain the retreat to $1.14. Such a pullback is often expected after a massive bullish stint like XCAD Network’s move from $0.97 to $1.19.

Traders hoping to catch the uptrend in its course must wait for another confirmation, preferably above the upper trend line. Considering the optimistic outlook from the Moving Average Convergence Divergence (MACD) indicator, XCAD’s uptrend might still be in safe hands,

In addition to a buy signal which came into the picture when the MACD (blue line) crossed above the signal line (in red), the indicator holds above the mean line (0.00), suggesting the path with the least resistance is to the upside.

XCAD Network price rally may also have been triggered by increasing demand among whales who hold 10,000 to 100,000 tokens. Based on on-chain data from Santiment, addresses in this tier now hold 2.36% of XCAD’s supply – the highest ever. If demand for this token keeps increasing, the price may close the gap to $2 before 2023.

Altcoins with Potential for Quicker Gains

XCAD Network price has shocked many analysts with its bullish spike that almost cleared resistance at $1.2. While its uptrend seems intact, profit booking among investors may stifle price growth.

Therefore, investors may be interested in newer crypto projects that could rally following their first exchange listings. The tokens listed here are performing exceptionally well in their presale stages and may be worthy of early bird access as investors plan for 2023.

FightOut is a Move-to-Earn (M2E) fitness and gym, gamifying the fitness lifestyle. It hopes to make fitness affordable to all while enabling users to earn from the workouts and challenges they complete.

The platform runs on a tokenized economy powered by its native token, FGHT. In-app purchases are supported by another token, REPS, which can be bought using FGHT.

When launched, users will mint their own digital NFT avatars for the metaverse, where users will participate in leagues, tournaments, and special game modes.

Investors are participating in a presale to raise funds to ensure the FightOut platform’s timely delivery. Over $2.7 million has been raised with 60 FGHT selling for 1 USDT. The team is currently running a time-limited 50% bonus for crossing the $2 million market.

Dash 2 Trade (D2T): The Go to Platform for Crypto Analytics

Dash 2 Trade is a new cryptocurrency ecosystem designed to help everyday traders make informed decisions in the market. It enables features such as trading signals, social sentiment and on-chain analysis.

The team is also developing a strategy builder to help traders back-test ideas and share them with others. Dash 2 Trade offers a bespoke scoring system for investors to participate in selected presales.

Dash 2 Trade’s presale is currently in its final stage with $10.41 million out of the expected $13.40 million raised. The token’s first CEX launch will go live on Wednesday, January 11, 2023.

For a long time, the carbon credit industry has been preserved for big corporations. However, C+Charge believes that every electric vehicle (EV) driver should also benefit. The crypto platform is launching with a mobile application and charge stations.

C+Charge presale is in stage one, with 1 CCHG selling at 0.013 USDT. About $2 million has been raised since the presale started. Only 159 million tokens are left before the price increases to 0.0165 USDT.

Here’s Why Bitcoin Price May Pump to $20,000 — But C+Charge is a More Profitable Alternative

FightOut (FGHT) – Move to Earn in the Metaverse

Preserving and reinventing music festival legacy in the metaverse