Why Versailles Heroes Think it’s the Next Big Thing

The NFT industry is getting pretty stale. It seems that projects just continue to release the same-old ideas over and over with little-to-no innovation whatsoever.

Well, the good news is that Versailles Heroes has just changed the entire way that NFTs will function and operate inside gaming metaverses. They have released a new breed of NFTs that can be upgraded inside the game. As players improve their proficiency and nurture their heroes, their NFTs become more valuable.

They believe Scalable NFTs are the next big thing in the industry. To find out why just keep reading.

What is Versailles Heroes

Versailles Heroes is a unique competitive multiplayer online battle arena game (MOBA). The game has a fully-fledged economy and contains GameFi and Metaverse elements inside one platform.

The system combines two cryptocurrencies, MOH and VRH, with the gaming world, NFT art, and blockchain technology to create a fully self-contained gaming ecosystem that is totally governed by a Decentralized Autonomous Organization (DAO).

The team is dedicated to creating a total gaming world that its players fully own. For this reason, Versailles Heroes is set to achieve a fully formed DAO after the game’s code becomes open source. This DAO will eventually allow all players to have their say in the game’s future direction through a voting dashboard.

The entire Versailles Heroes metaverse is based on a gripping story about two fictional planets that orbit one another; Cybora and Solaris. Unfortunately, Cybora has been overrun by monsters and raptors, making it a perilous place to roam. However, interstellar explorers crashed on the planet and found magic boxes and stones that could give humans special abilities. The people of Versailles used these magic boxes to create magical heroes to reclaim Cybora.

These are the heroes that players use in the game. 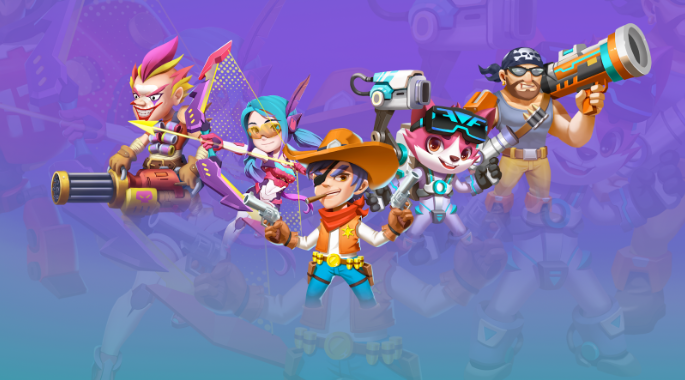 The heroes are familiar characters from ancient cultures, including monsters, explorers, sorcerers, prophets, magicians, and tanks.

The MOBA game contains both PVP and PVE mechanics in its matchmaking system, allowing players to face each other or finish quests against the environment. All winners are rewarded with gMOH, which can be converted into MOH and sold for other cryptos.

To get started, players must purchase an NFT hero from the marketplace. Some of the heroes come at no cost, while others can be purchased on the marketplace by buying a mystery box.

While exploring, players can accumulate virtual assets NFTs, which are embedded into the scalable NFTs.

Scalable NFTs: Why do Versailles Heroes think it’s the next big thing? 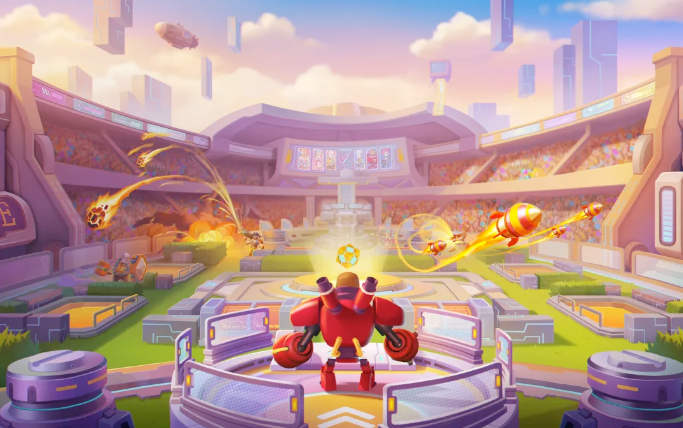 Scalable NFTs are an innovative design that the Versailles Heroes team built from the ground up for their metaverse. The team currently isn’t happy with the state of NFTs and has a mission to change how NFTs function and operate in the gaming metaverse.

You see, NFTs typically represent tokenized virtual items that prove that the holder of the NFT has ownership rights to the virtual object. However, the value of the NFT is only supported by the game’s economic structure, not by the intrinsic value of the NFT itself. Investors purchase these NFTs as they believe they have investment potential and hope to sell them for a profit in the future.

Furthermore, these NFTs are generally static, meaning that the NFT comes “as-is” and won’t change over time. As a result, there is no option to generate additional revenue or growth from the NFT through upgrades.

This is precisely the problem that Versailles Heroes seeks to change about NFTs.

The team believes this is an inherent problem with NFTs and the entire metaverse ecosystem. According to their thesis, the value of NFTs should come from upgrading and nurturing heroes within the gaming ecosystem – not from rare traits and fancy clothing.

This is why they designed Scalable NFTs – also known as embeddable NFTs.

The entire idea of a Scalable NFT is to allow players to embed additional items within the NFT to make it more valuable. As the player explores the environment and completes quests, they will come across additional virtual items that they can add to their NFT as an upgrade. Any other upgrades embedded into the NFT are recorded on the blockchain.

Players who reach deeper levels in the game through playing time will have more valuable NFTs. Furthermore, as players can add any virtual item, the NFTs will become highly unique and desirable.

This is an entirely new way of using NFTs; the team believes this is the next big thing in the industry.

The Versailles Heroes team has a passion for video games, with a strong desire to improve the metaverse. Blockchain Technology Labs is the company behind the project, and they have extensive experience in gaming applications, as well as artificial intelligence/machine learning and augmented reality/virtual reality enabled mobile applications. Therefore, we can expect big things from Versailles Heroes and its scalable NFTs.

What are the NFTs in the game? 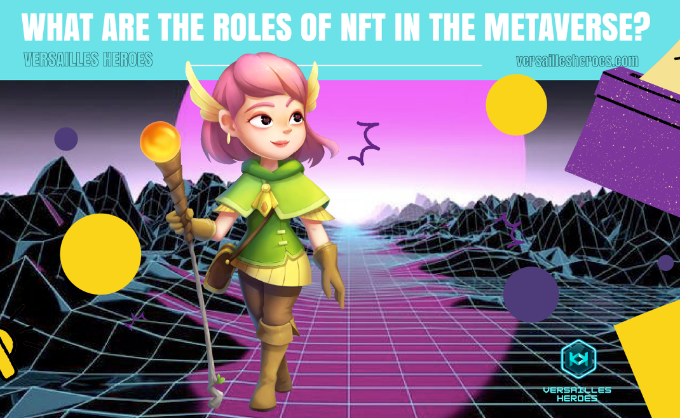 Players have to begin the game by purchasing an NFT hero from the marketplace to get started. The NFT heroes are used as avatars in the game. So far, the following heroes are available to choose from;

The type of hero you choose depends on the gameplay style you favor when playing games. For example, if you are typically more attack-minded in games, you will gravitate toward Mages, Marksmen, and Assassins who deal burst damage. Alternatively, if you are defense-minded, you will likely prefer to choose Tank and Support heroes.

Each hero is unique and comes with a range of special skills, including;

As you play the game, these fundamental attributes are increased through upgrades. Additionally, the battle counts (the number of battles the NFT has been involved in) will increase as you progress deeper into the game.

At some point during the game, it will be essential to upgrade your NFT Heroes as the players you face become stronger. Any virtual item you find in the game can be embedded into the Scalable NFT to make your hero stronger. Players can also purchase additional upgrades through the marketplace.

Any upgrades are recorded on the blockchain, including;

The great thing about the game is that skillful players will see their heroes being upgraded much quicker than non-skillful players. As a player’s proficiency increases with a particular hero, so will their game ranking.

The more games a player wins and the number of trophies they collect can increase their ranking. The ranks range from Newbie to Challenger Supreme; 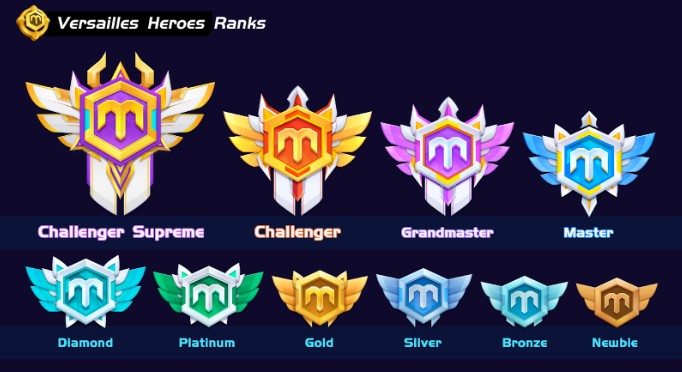 The good thing about the game is that Newbie-ranked players will never meet experienced players on the battlefield due to the ELO rating mechanism in matchmaking. Typically, Newbie players will be matched up against AI players to help them quickly climb in the rankings.

What type of games are available? 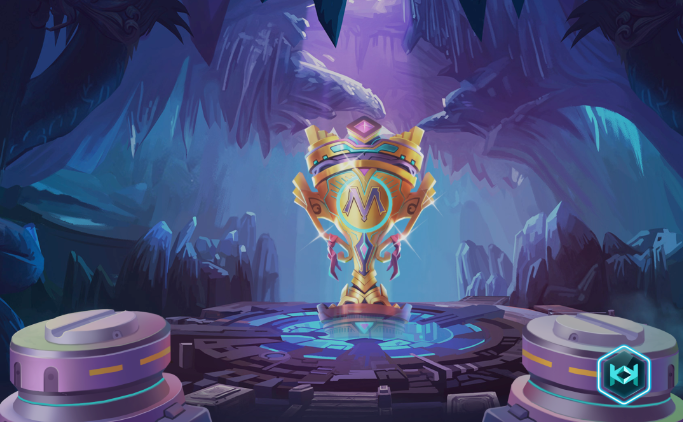 Versailles Heroes has developed five different game modes that players can enjoy. There is undoubtedly a game mode available for every type of player. The game modes include;

The Practice Grounds is a tutorial to introduce newbies to the game.

The Battle Royale is likely one of the most popular game modes. Taking the central theme from high-profile games such as Fornite and Apex Legends, the Battle Royale will see 12 heroes transported to an island with a boundary that continues to shrink as the five-minute time counts down. Players must battle each other to survive in the Battle Royale, and they can gain experience by finding and hitting supply boxes in the match.

These are just the first set of game modes, and Versailles Heroes will continue to add more modes after launching.

How to register for the Whitelist Event?

Versailles Heroes is expected to be released to the public in Q1 2023. However, the team is hosting a Whitelist Event that will run from September 9th to October 5th. In total, there are 10,000 whitelist spots available, and everybody involved will receive the following benefits:

Join the community Discord.
Join the Telegram group.
Follow Versailles Heroes on Twitter and retweet the pinned post.
Create your account with your email address on the official website and connect your wallet.
Receive the whitelist event code with your registered email and submit it through the whitelist event portal.

Overall, Scalable NFTs might just change the way that future metaverse games decide to operate. If NFTs can be upgraded over time through gameplay, it might be a great feature to keep players engaged in the game instead of just playing to make a profit.

Flow price prediction: Is it safe to buy this crypto dip?

Stories of People Who Lost a Lot