What are Kodas – Their Role in the Otherside Metaverse

On 19th March, the BAYC Twitter and Youtube channel released the trailer for ‘Otherside’, a metaverse world. It showed a Bored Ape NFT hero being taken away by a creature with Koala-like and alien features to the Otherside metaverse, where he was welcomed by other NFTs.

Ever since that trailer arrived, the NFT crowd has been eagerly waiting for the Otherside metaverse to arrive. While they are interested in Otherdeeds, the rare Koda present in some of them has them most intrigued.

What is a Koda NFT?

Kodas are a collection of 10,000 creatures carrying unique traits and carrying immense value in the Metaverse. Almost every piece of information about them is covered in mystery – owing to the BAYC tease and the NFT Twitter Space’s curiosity to start speculating whenever there is something new floating in the Ethereum blockchain.

That trailer made the BAYC holders, as well as others, get excited. Speculations came rushing in, and NFT investors eagerly started to wait, anticipating the lands to drop and the Kodas to arrive.

The hype created by this project has opened doors for speculations, with many stating that Koda NFTs are en route to becoming another blue-chip project that might redefine the metaverse ecosystem for the better.

But what is a Koda NFT? What role is it about to play in the Otherside? And most importantly, what future does it hold in the NFT?

The Leaked Otherside Pitch Deck that Pumped the Crowd

Koda NFTs first caught the attention of the crypto crowd when it was first mentioned in the pitch deck, obtained by The Block and leaked sometime before March 19, 2022. It was around the same time when Yuga Labs started to make big and aggressive moves in the blue-chip NFT domain, including acquiring CryptoPunks and Meebits.

The Yuga acquisition of CryptoPunks riled many crypto enthusiasts because of the potential CryptoPunks now held for those NFT holders who want to own the exclusive creative rights to their tokens.

As they went through the pitch deck, users stopped at one particular slide that first brought the strange character to their attention. It showed a piece of land on the Otherside; standing at the center of the landscape was a small creature with koala-like features similar to the trailer.

The BAYC crowd became intrigued. What happened next was the arrival of many rumors, speculations, and hype – just like the Yuga Labs wanted.

The following response of Yuga labs was expected; they stated that the pitch deck was an old one. Yuga Labs Co-Founder, Gargamel, said on discord:

“That’s an old, outdated pitch deck and a hilarious pitch deck that neither Gordon nor I ever saw. There are a lot of things here that we have already changed and will continue to change things because screw doing expected things.”

But on April 23, BAYC put another tweet that stoked the fires of rumors, further igniting the interest.

It tweeted: “What the fuck is Koda?”

As per the pitch deck, Koda’s are “Primal Beings that have ushered us into the Otherside”. It classifies them as a race of cosmic beings important to the survival of the Otherside; their energy is holding the universe together. 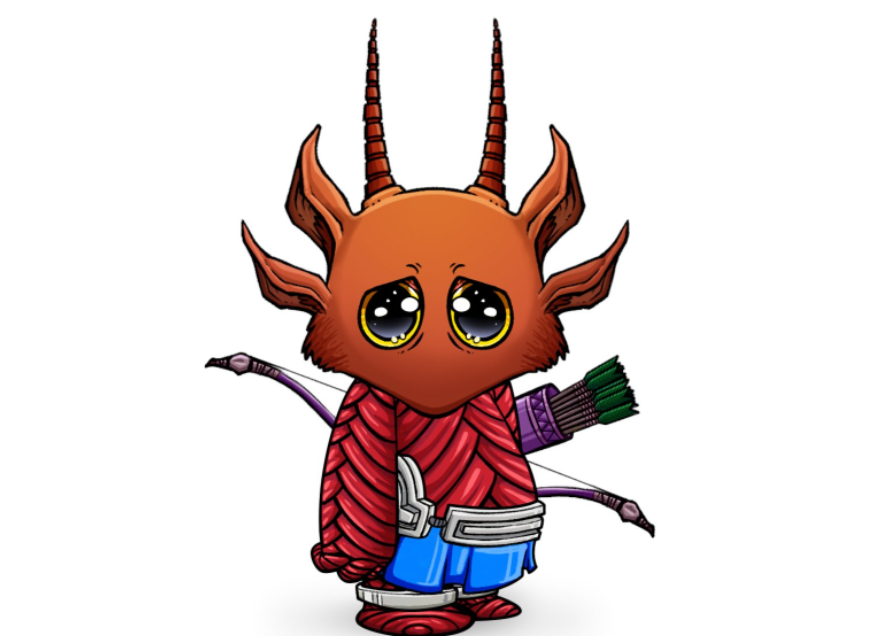 An image of the Koda Creature

Taking a deep dive into the lore, we come up with the following comprehensive story:

Koda used their cosmic energy to create the last microverse into “our dimension.” This microverse is the Otherside. Not wanting to see the Otherside barren and willing to do anything to preserve the universe’s balance, the Kodas pulled Bored Apes and other NFTs into the Metaverse. In the trailer, we saw the following NFTs in the submarine that emerged:

Though not very comprehensive, this trailer gives just enough information about the Metaverse to get us excited. After much speculation, Kodas made their first appearance in the Otherside mint, just like it was mentioned in the pitch deck.

At first glance, these creatures appear as additional traits in Otherdeeds and less as separate Non Fungible Tokens. Other deeds are land NFTs of the Otherside metaverse (we will discuss more in later sections).

Coming back to Kodas, it seems that they are tied to the lands of the Otherside – probably as watchers.

Simply put, Kodas didn’t launch as a standalone NFT PFP collection, something BAYC is known for. It caused minor distress among the NFT crowd, especially those looking forward to showing off their Kodas on Twitter.

But it is not the end; Kodas might still be launched as full-metaverse-ready avatars in Otherside metaverse.

Less than Optimal Distribution of Otherdeeds

The Koda NFTs are part of the varying traits tied to your lands once you obtain Otherdeeds NFT. Out of 100,000 land plots available, 10,000 contain a Koda. It means that there is a 10% chance for you to end up with a Koda with your Otherdeed NFT purchase. So far, more than 97.5k Otherdeed NFTs have been claimed, with Kodas being in 7.6k among them.

It means there are nearly 2.4k Kodas remaining. But can you take part in this lottery? Unfortunately, no, the time of public mint has passed.

But the first minting event was less than stellar. During the first mint, 55k out of the 100,000 Otherside NFTs were made available in the public mint.

And since BAYC had announced earlier that it wouldn’t be launching Otherdeeds via the Dutch auction, there was hope for there to be no gas wars. To prevent congestion, Yuga labs limited the number of Otherdeeds people can purchase in one transaction to two.

But, because of the anticipation built in the NFT community, it didn’t happen as planned.

During the first wave of sales, the gas fees spiked and then crashed through the roof – costing almost as much as the land itself. The fee rose to $6,200 at one point to mint two plots of land on the Otherside (One plot of Otherside was valued at $6,621 once).

Many investors had the gas fees deducted from their crypto wallets but didn’t receive the Otherdeed NFT. Yuga labs have since refunded their gas fees.

A Brief Look into the Otherside

Before we take a look at the potential of Koda – presently driven by speculation but reasonable enough to be true – let us take a detour to the Otherside, BAYC’s flagship and the most ambitious metaverse project to date.

BAYC still isn’t upfront about presenting all the details, but we’ve gathered some information thanks to Twitter speculations and some legible sources.

The Otherside is a 3D metaverse, gamified and created with Animoca Brands. It is powered by Apecoin, the native governance token of the Ape ecosystem.

Since its introduction, it has driven the NFT community has gone “bananas,” and not because of how cool it looks. The reason behind the hype is the inclusion of other NFT projects into the Otherside Metaverse.

In the trailer, there are other NFTs from Cryptopunks to Mutant Ape Yacht Club to World of Women to Meebits and many other NFTs.

Otherside Metaverse was launched on April 30 and has cheered the NFT enthusiasts and grabbed the attention of some major investors.

So how can you become part of the Otherside? You need to purchase a parcel of land within the Metaverse. Following are the aspects of each plot of land.

Each parcel of land is a unique blend of environment and sediment
There are some resources on these lands
Some contain powerful artifacts
And in very few among them, a Koda is watching over.

Following are the listed traits of the Otherside lands.

Every resource is divided into a tier, and the other traits listed on the Opensea detail the various characteristics of the few Kodas roaming in some of the lands.

To buy these NFTs, you can head over to the Opensea.

After the first mint, all the 97.5k Otherdeeds for Otherside have been put on Opensea. There are 34 thousand owners, and the floor price of these NFTs is 3.4 ETH.

The 10,000 Kodas are dynamically generated with the following traits:

What Could The Koda NFTs be in the Future?

As we mentioned earlier, the predictions we can make for Koda right now are purely speculative. But if we backtrack and see the trends of any BAYC NFT and put together the underlying mechanics that could govern them, we can see a non-fuzzy picture of Koda’s potential.

The most comprehensive prediction about the Koda NFT comes from the user named Willy Bullish. He has developed a theory by weaving his experience of the industry with the information from the leaked pitch deck. 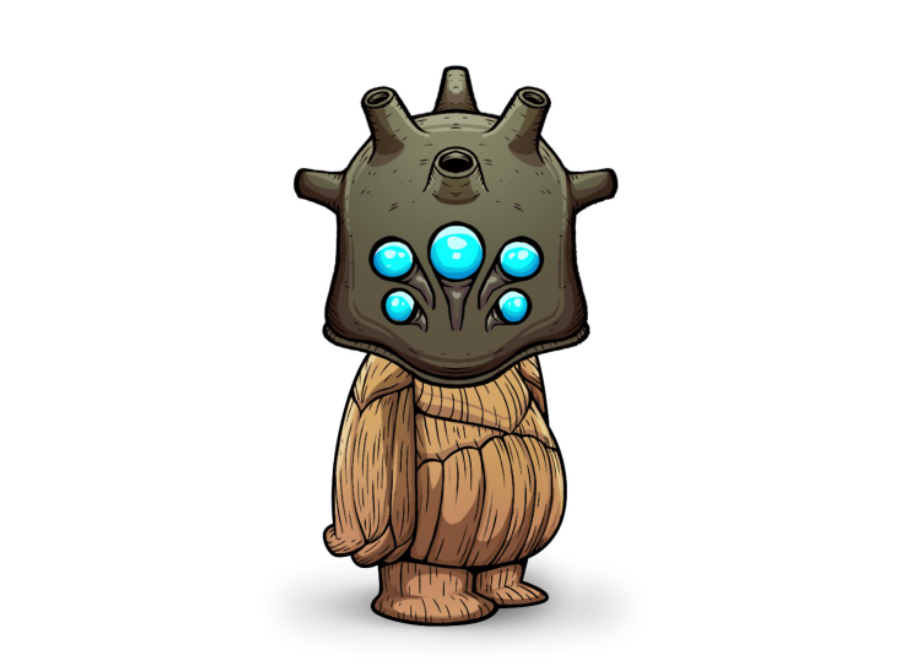 He predicts that the Genesis Koda will live on the piece of land, and they will level up by competing in automated missions. Each time these Kodas venture out, they will come back with artifacts, decorations, gear and even 10ktf accessories. You’d be able to put them on the secondary for sale, display them on your plot, or both.

He dives deeper into how BAYC will adopt the Axie Infinity approach and introduce a breeding mechanic for Koda NFTs. As the population grows, so will the $Ape economy. He states that the $Ape fees will create passive income for the Koda owner. And as the next generations of Koda arrive, the people’s wealth will grow.

You won’t be wrong to think that much of this speculation results from an overly-bullish community about the Koda NFT. And here are the reasons:

Koda NFTs are not available to purchase separately – yet.
The chance of you ending up with a Koda in your land is 10%.
Since the distribution is random, chances can get slimmer.

BAYC has a history of presenting half information through the tweets and then letting the NFT community take the wheel. And in most, if not all cases, such predictions become true.

So, even though getting this NFT right now is based on chance, it might not in the future.

You cannot buy Koda NFT right now. The best you can do is go to the Opensea Marketplace and get your hands on an Otherdeed. If you’re lucky, you’ll see a Koda roaming on your piece of Otherside land. If you’re not, wait for the official announcement by Yuga Labs. 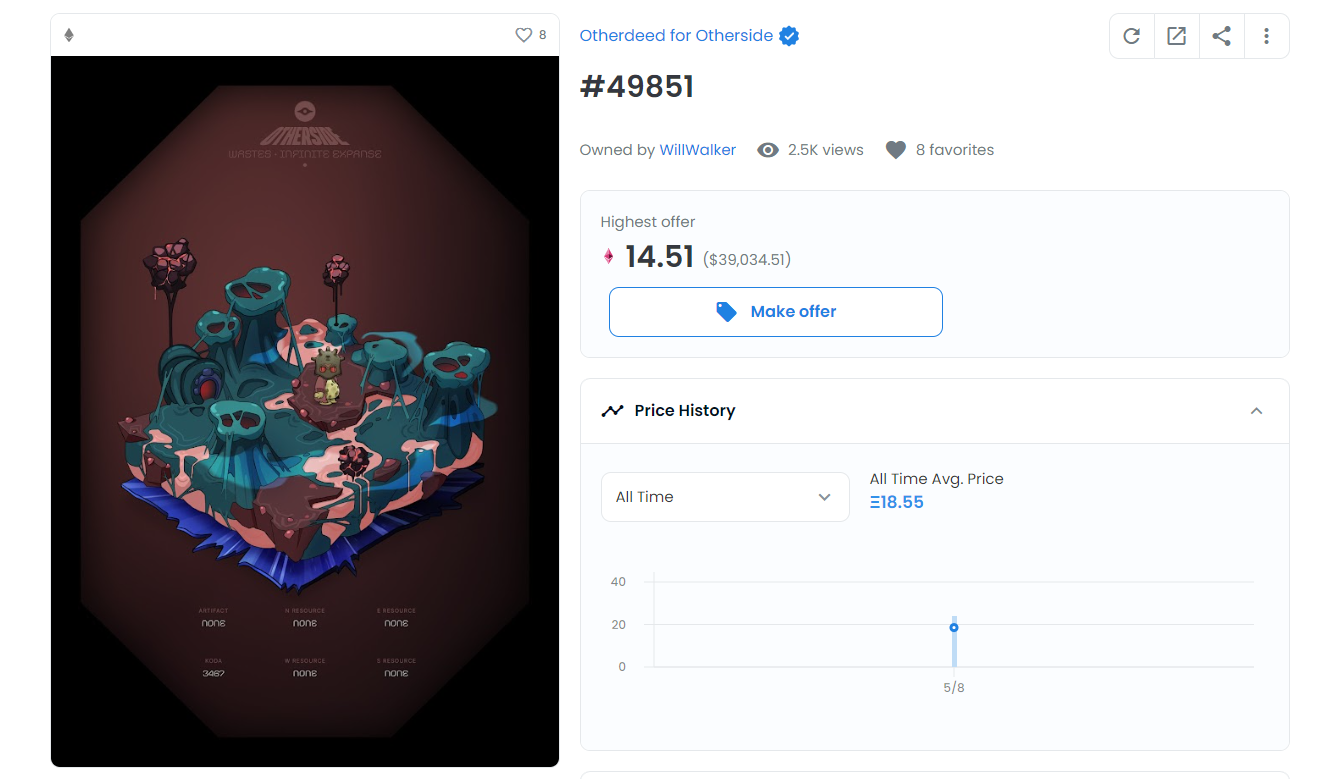 But before you go and purchase the deed, make sure that you have one of the best wallets to protect and preserve your crypto assets. We suggest going for eToro or Coinbase as they offer industry leading security. Coinbase wallet supports storing NFTs.

And patience is essential. Many NFTs named Koda on the Opensea don’t have anything to do with the Otherside Metaverse. Do not purchase those tokens; none of them can live up to the blue-chip potential that Koda NFTs have.

If you’re on the lookout for Koda NFTs, you can, for now, direct your attention to other blue-chip projects.

Metaverse is on a booming phase right now, and most in the investing space are bullish about it. This is why make sure that you are ready to participate in the upcoming minting phases, as those would be the NFTs that will define the blockchain ecosystem.

68% of retail investor accounts lose money when trading CFDs with this provider.

TRX is up by more than 3% today

Web3 had a small, yet important presence at Paris Fashion Week

New MEXC listing Of Tamadoge: Why Should You Still Invest in Tamadoge