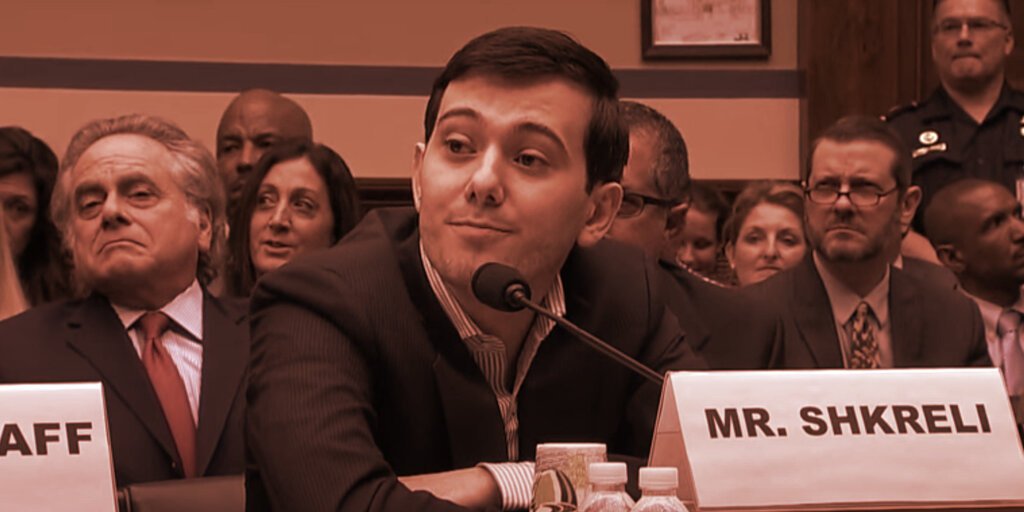 In a Twitter Space on Monday, Shkreli critiqued Ethereum founder Vitalik Buterin, bashed NFTs, and went off on the “shitcoin retards” who recently launched an altcoin in his honor.

Shkreli, the former head of Turing Pharmaceuticals, earned the moniker “Pharma Bro” after notoriously raising the price of the toxoplasmosis drug Daraprim by 5,000%. He was convicted of securities fraud in 2017, and he’s been quite busy since his early release from prison on May 18.

Over the weekend, he claimed that he learned to trade on the decentralized exchange Uniswap while in prison. He further claimed today that he received unspecified perks in prison in exchange for giving prison guards advice on Bitcoin. Now that he’s out, there’s been reports that the felon is already back on Bumble and the Bloomberg terminal.

He is also seemingly immersed in crypto, with no shortage of opinions about the industry and its technology. He said today during the Twitter Space that he does not believe in Vitalik Buterin’s concept of the blockchain trilemma—the idea that blockchain networks must make tradeoffs when attempting to acheive security, scalability, and decentralization simultaneously.

“I guess he’s mad at me because I think he’s full of shit, that, you know, it’s sort of been proven that there is no blockchain trilemma,” Shkreli said, claiming that Algorand founder Silvio Micali proved that the trilemma was “a mathematically weak idea.”

“No offense to Vitalik though, he was brilliant,” Shkreli added.

I find it morally problematic even as someone heavily into crypto

And Shkreli appears to have already built up a fanbase in crypto. Just days ago, the Shkreli Inu token, named after the former hedge fund manager, launched on Ethereum. Roughly $1 million worth of the token has been traded on Uniswap over the last 24 hours, per data from Nomics. Shkreli claimed today that he received “half” of the Shkreli Inu supply, but said he didn’t create it.

As for his thoughts on NFTs and Web3, Shkreli said that he’s interested but not impressed. He referred to generative NFT collections of 10,000 items, such as CryptoPunks and Bored Apes, as “retarded” and said that Web3 is just a “buzzword.”

“It means nothing,” Shkreli said.

He went on to defend his beliefs about pharmaceutical pricing, arguing that high prices are morally acceptable in part because most Americans have health insurance.

“I don’t really give a fuck,” Shkreli said of his past behavior raising drug prices.