How Terra’s UST and LUNA Imploded 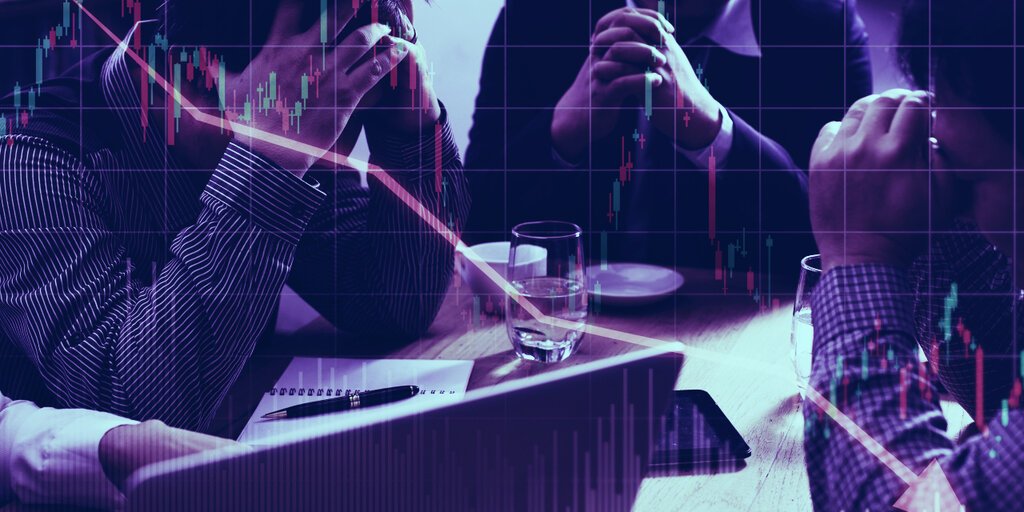 Amid the craziest week in crypto ever, the collapse of Terra’s UST stablecoin and governance token LUNA emerged as the biggest story. Amid the crash, LUNA, formerly a top 10 coin by market cap, fell 100% to fraction of a fraction of a cent, and UST, designed to stay pegged at $1, bottomed out at 13 cents.

So what the hell happened? Grab your coffee, you’re going to need it.

There were several forces at work. The first is the mechanism behind Terra and its stablecoin. The second was general panic. Many investors—who may have been wholly unaware of exactly why the stablecoin was dropping—rushed to the exit at the first whiff of a depegging.

As mentioned in a previous edition of Decrypting DeFi, Anchor Protocol, Terra’s high-interest savings account, has been steadily reducing the rates it offers holders for depositing UST.

Moreover, this rate was expected to continuously drop 1.5 percentage points each month if there were more lenders than borrowers on the platform (which there have been historically).

With interest rates expected to fall, UST’s number one use case began to waver. On April 23, for example, more than 72% of all UST in circulation was locked up in Anchor. Pretty much the entire raison d’etre for this stablecoin was to get deposited in Anchor.

Once it became clear that that 20% interest wasn’t going to last, UST holders began to leave.

On Friday, May 6, there was roughly 14 billion UST in Anchor. By Sunday, this figure was 11.7 billion. Remember, UST was still pretty much pegged to the dollar at that point, which means roughly $2.3 billion in capital took flight over the course of last weekend.

And since we know that UST holders were only interested in the Terra network because of Anchor, their departures meant they had no further use for that UST.

To exit UST, you have two options.

This mechanism lets holders swap 1 UST for $1 of LUNA, destroying the UST in the process. This creates an arbitrage opportunity whenever 1 UST falls below $1, as speculators can buy the discounted UST and trade it in for $1 in LUNA, making a small profit. The opposite is also true: If UST trades above $1, you can swap (and burn) $1 of LUNA for that UST.

Option two is turning to the stablecoin exchange Curve Finance.

Typically, when a stablecoin faces a minor price change, savvy arbitragers will head over to DeFi’s deepest liquidity pools on Curve and trade the discounted stablecoin to whichever alternative has held its peg.

For example, if DAI is trading at $0.99, investors will buy the discounted DAI and sell it for USDC (which, in this hypothetical, is $1) to bag a profit. That buy pressure normally pushes the price of DAI back up to $1. This is true for UST, too.

That’s the lay of the land. Now let’s unpack how this broke down so badly for UST.

First, the burn-and-mint exit. The chart below offers a pretty clear idea of the sudden interest via this exit. The supply of UST cratered as it was burned, while the supply of LUNA mooned.

This wasn’t a pain-free exit either, as users were met with a variety of technical issues.

Remember, Terra is still a blockchain network and encounters gas fees for activity. Along with higher gas fees than usual, the network is also limited in terms of how much UST or LUNA can be burned or minted at a time.

Things were slow and congested, so exchanges began pausing withdrawals.

This burn-and-mint mechanism can also have an impact on the price of LUNA.

Swapping and burning UST for LUNA means minting more LUNA, diluting the supply and dropping the price of this token. Additionally, as the price of LUNA drops, whenever you swap 1 UST for $1 worth of LUNA, you steadily need more and more LUNA to hit that $1 mark (which means minting even more LUNA).

At a certain point, the price of LUNA could drop so low that there simply isn’t enough liquidity to provide an escape hatch for all that UST coming in. But more on that in just a moment.

As for the second exit option, Curve Finance, here’s how that looked.

UST depegged by a little less than $0.02 over the weekend as Anchor departees swooped in and began flipping UST for any other stablecoin, be it Tether’s USDT or Circle’s USDC.

Eventually, the specific pool that allowed for these trades (called the “UST + 3Crv” pool, which also pools all the major stablecoins) became unbalanced, meaning there was far more UST than the other stablecoins in the pool.

Let’s pause and briefly explain what’s happening when you sell UST for USDC on Curve.

If you sell UST for USDC on Curve, you will add more UST to this pool and remove USDC. Eventually, the pool will have more UST than USDC. In order to correct course, the pool then begins to offer that UST for a discount in hopes of getting arbitragers to make the opposite trade (and rebalance the pool).

This is in part why we began to see a slight depegging beginning on the weekend—Curve was doing what Curve has been doing since its invention.

The problem in this specific case was that the opposite trade, the one that would rebalance the pool, wasn’t happening. It appeared that, despite the relatively lucrative arbitrage trade, no one wanted to be holding UST. As for why, well, don’t forget Terra’s top app—Anchor—had begun to hit the skids.

And at this time, at least one investor dumped more than 85 million UST tokens in exchange for 84.5 million USDC tokens in this pool. This, of course, put even more pressure on UST’s dollar peg as Curve continued to create the discount hoping to incentivize arbitrage traders to rebalance the pool. And down you go.

Soon, everyone on the internet was watching UST lose its peg and LUNA plummet in price.

It was also around this point that the market capitalization of UST edged toward overtaking LUNA’s, which would mean the latter would no longer be able to absorb the former, creating a death spiral.

It dumped a ton of UST (approximately $216 million from Jump Capital, whose president is also on the LFG Council) into the Curve pool to help the stablecoin find its peg. It then reportedly began deploying the Bitcoin holdings that it’s been stockpiling to a “professional market maker” who was essentially told to spend BTC when UST is below the peg (and vice versa if it ever trades above the peg).

Unfortunately, it was a brief reprieve. Exits through Curve ate through the bailout liquidity. It’s also unclear whether that BTC was ever actually used to defend the peg.

Ultimately, LUNA’s price continued to plummet as folks ditched UST and then sold their LUNA until, eventually, LUNA’s price was so low that there wasn’t enough runway for UST, creating an enormous amount of bad debt.

Do Kwon and the Terra community doubled down, and opened up how much LUNA can be minted at a time. But all this did was accelerate the spiral. On May 8, LUNA had a 343 million circulating supply. By May 12, that figure had ballooned to 32.3 billion (and counting).

Despite the negative feedback loop, the Terra community proposed three more emergency actions, which boil down to simply lighting as much UST on fire as possible (without having to mint LUNA on the other end).

The final result? Another algorithmic stablecoin bites the dust.