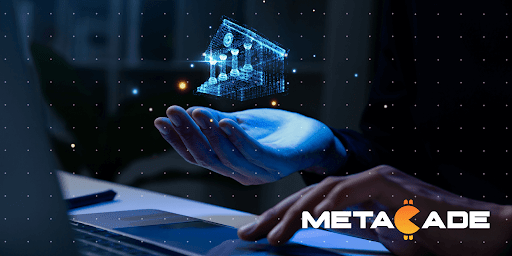 With the metaverse expected to transform our everyday lives, becoming an early investor could be one of the most profitable moves you could ever make. One of the best ways to expose yourself to the growth of the metaverse is investing in new metaverse tokens, like Metacade.

In this article, we will discuss what this new metaverse token has going for it, and whether its native token, MCADE, could deliver 10x returns in 2023.

What is Metacade (MCADE)?

To understand why Metacade could 10x its value in 2023 as one of the hottest new metaverse tokens, we first need to discuss what Metacade actually is. Metacade is Web3’s premier destination for everything GameFi and the metaverse. It’s a space for like-minded gamers, crypto fanatics, and developers to link up and make the most out of the rapidly-growing GameFi industry.

Part of Metacade’s goal is to make Play2Earn and metaverse gaming accessible to all. To do this, it’s rewarding players with the MCADE token each time they post reviews, alpha, and writeups that help another player out, turning Metacade into the ultimate destination to learn about and immerse yourself in the world of GameFi.

Metacade is packed full of features that are likely to draw in a significant crowd of varied users. On the platform, you’ll find tournaments, prize draws, live chats, and even testing opportunities to work and earn with some of the community’s game developers.

One feature that’s almost sure to attract some attention is the launch of Metagrants, which allow the community to vote for and finance games in a competition-based arena. Metacade’s plan is to issue dozens of these Metagrants to fund the next wave of the best Play2Earn titles, with each one hosted in its virtual arcade.

Now that we know what Metacade is, let’s consider whether this new metaverse token could deliver 10x gains in 2023.

The Case For MCADE Increasing Tenfold In 2023

Tokens typically see large price rises following a particular catalyst: a flood of users, a new announcement, or a significant partnership, for instance. What could be the catalyst in Metacade’s case? Well, it’s likely to be plenty of new players logging on and picking up MCADE tokens as the GameFi market balloons at 10x the rate of traditional gaming by 2025 (Crypto.com).

To determine whether this new metaverse token could 10x, we need to start by evaluating its market cap. At the end of the MCADE presale, tokens will be worth $0.020 each. With 1.4 billion tokens circulating, we have a launch market cap of $28 million. If Metacade’s value increases tenfold, so will its market cap, to $280 million.

When you consider that top new metaverse tokens like The Sandbox and Decentraland reached $6.5 and $7 billion at their respective peaks, $280 million seems easily attainable for Metacade in 2023, especially in an upcoming bull market where GameFi is set to dominate.

So could Metacade even be worth $2.00, going 100x in the process? Its market cap would need to be $2.8 billion for that to occur, which is not implausible compared to the growth The Sandbox and Decentraland saw in 2021.

Consider that, according to Crypto.com, the GameFi market is expected to be worth $50 billion by 2025. If  Metacade’s vision unfolds as planned, then a $2.8 billion valuation is definitely within reach.

Metacade Has the Greatest Potential of All New Metaverse Tokens

Given Metacade’s plans to be a key player in the GameFi and metaverse space, it’s positioned to see mass user adoption as both of these industries grow exponentially. We’ve already seen how successful new metaverse tokens like The Sandbox and Decentraland can be, and if Metacade can come anywhere near their valuations, those who bought in presale could easily earn 10x their initial investment.

You can participate in the Metacade pre-sale here.

Elon Musk Fears Severe US Recession is Coming, Urges the Federal Reserve to Do This to Prevent It