The cryptocurrency market is hanging in there following a difficult week. Its total cap has risen by 1.3% in the past 24 hours, to $1.027 trillion. This is a 5% drop in a week and a 6.9% fall in a month. Such drops are aligned with negativity in stock markets, with the Federal Reserve continuing to signal an aggressive rate-hiking policy. However, the longer prices are subdued by disproportionate negativity, the more likely a big recovery rally becomes. Accordingly, here’s our pick of the 5 best cryptocurrency to buy for the weekend rally.

5 Best Cryptocurrency to Buy for the Weekend Rally

IBAT is currently 20% down from its all-time high of $0.00554060. However, it is an extremely new coin, so it could test this level once again in the coming days and week.s

Running on Binance Smart Chain, Battle Infinity is a play-to-earn crypto gaming platform that sold out its presale within a couple of weeks. It first became tradable on August 17th, via PancakeSwap. Since then it LBANK Exchange has also listed it, with more listings likely due soon. The coin already boasts more than 10,000 holders, which is impressive seeing as how it began its presale only last month.

The deposits are now live on @LBank_Exchange

Get ready with your bags there.

Battle Infinity’s sports-themed gaming metaverse will comprise a range of games. This includes the IBAT Premier League, in which users will build their own fantasy sports teams made up of NFTs of real-life athletes. Said teams will compete against each other, with winners receiving crypto-based rewards.

In time, Battle Infinity will also grow to incorporate other crypto and NFT-based games. On top of this, it will also involve competitive staking feature, its own DEX, and an NFT marketplace. This will likely create a thriving and busy ecosystem, which is why IBAT is one of our 5 best cryptocurrency to buy for the weekend rally. 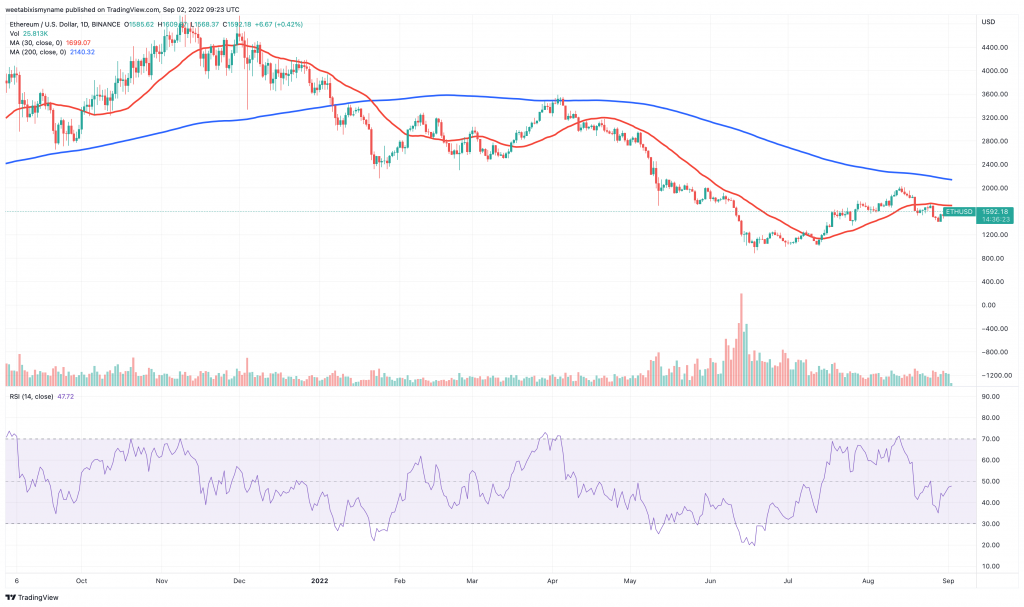 ETH’s indicators are so-so right about now. Its relative strength index (in purple) is just under 50, suggesting neither oversold nor overbought conditions. That said, its 30-day moving average (in red) is significantly below its 200-day average (in blue), suggesting that an upturn is due sooner or later.

Based on a look at Ethereum’s fundamentals, this upturn could come in the next few weeks. Yes, the much-awaited Merge is drawing close. Having successfully merged the final testnet (Goerli) in mid-August, developers are now looking at September 15 as the likely date when Ethereum will shift to proof-of-stake. In fact, co-founder Vitalik Buterin recently gave a timeframe of between September 10-20, with the Beacon Chain hard fork due this coming Tuesday.

Reminder: even though the merge is coming around Sep 10-20, the beacon chain hard fork is on Sep 6. Make sure to update your clients before then! https://t.co/x8GQCbtNNk

There’s a very good chance ETH will rally significantly in the coming days, as well as in the days after the Merge. Not only will the completion of the Merge offer a strong validation of the strength and competence of the Ethereum community, but it will set ETH on the path to becoming a deflationary cryptocurrency. Due to staking, the circulating supply of ETH will shrink, pushing up its price. This is why it’s one of our 5 best cryptocurrency to buy for the weekend rally. 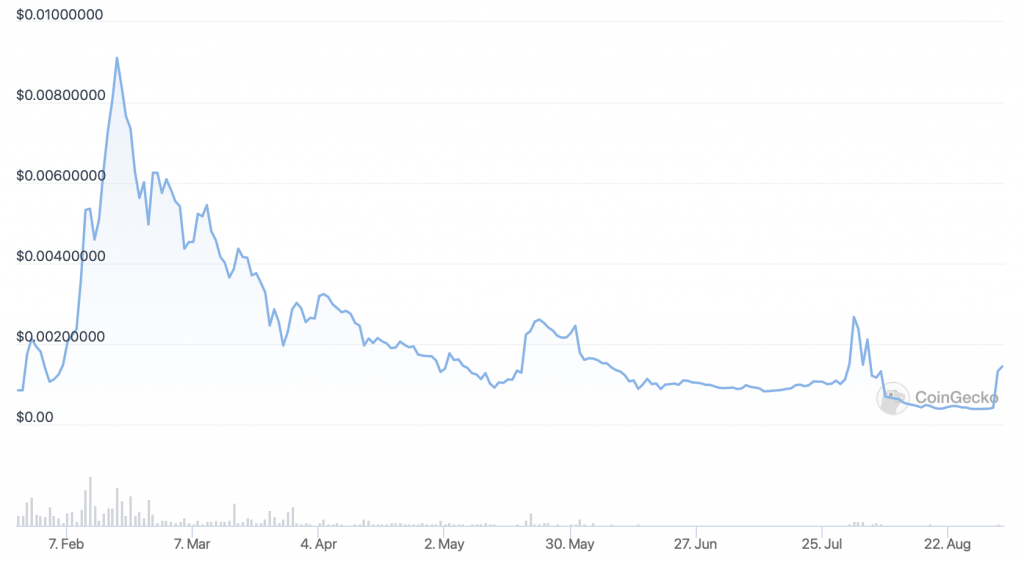 LBLOCK has gained a number of new listings in recent weeks, which largely explains why it has such (positive and negative) volatility. For instance, it recently went live on Gate.io, while it has also been listed on Uniswap, MEXC Global and LBANK Exchange in the past few weeks. Over time, these new listings will provide its market with more liquidity and demand, potentially pushing up its price in the longer term.

Would you like to enter the Lucky Block spaceship? You can do so now by buying V2 $LBLOCK on Uniswap! 🚀

Turning to fundamentals, Lucky Block is a crypto games platform that enables users to enter prize draws with a minimum guaranteed payout of $50,000. These prize draws launched at the end of May, while Lucky Block has recently expanded its ecosystem to include various NFT-related competitions. In addition, holders of LBLOCK can receive rewards for voting for charities that will receive a 10% portion of each prize fund.

📢 Important Announcement for the #LuckyBlockArmy 📢

We expect the audit to be completed within 2 weeks at which point the bridge will undergo several tests on a Testnet.

Tune in for further announcements! pic.twitter.com/ddVmjXSvFy

Lucky Block has also just announced the upcoming launch of its very own bridge. This will enable holders of the V1 version of LBLOCK — based on Binance Smart Chain — to exchange their tokens for the V2 version, which runs on Ethereum. This will reduce the circulating supply of the newer V2 version, which is the version listed on the above exchanges. By extension, it should help boost LBLOCK’s price. 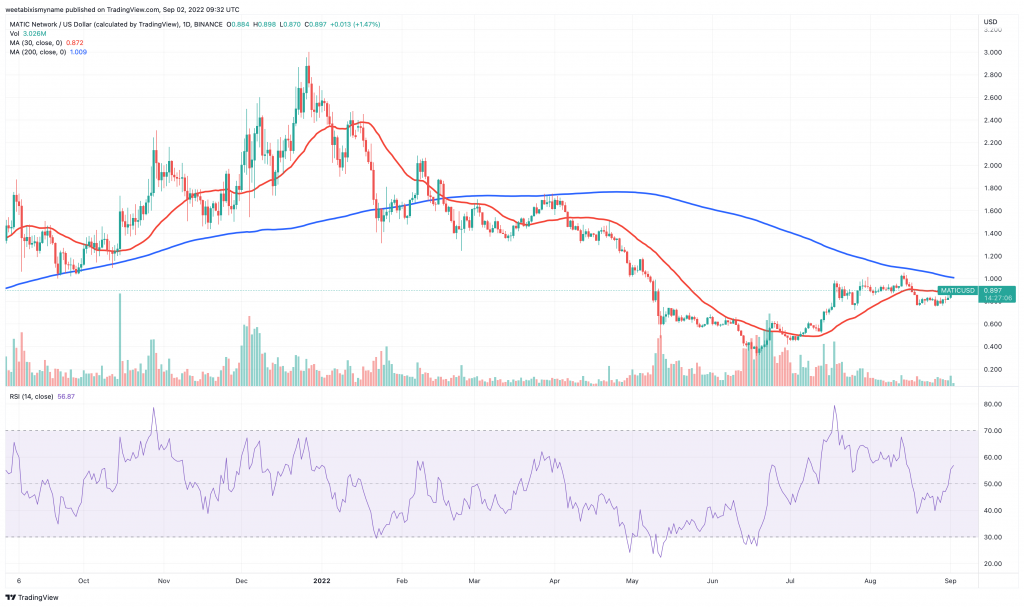 MATIC’s indicators are on the up, suggesting rising momentum. Its RSI has nearly reached 60, while its 30-day average could soon cross its 200-day. If this were to happen, it could signal a breakout.

Behind ETH itself, MATIC is likely to be the next-biggest beneficiary of Ethereum’s upcoming Merge. This is because even though the Merge will boost confidence in Ethereum, it won’t improve scalability in the short- and medium-term. As such, increased traffic for Ethereum will have to go through Polygon, which is the biggest layer-two scaling solution for Ethereum.

On top of this, MATIC has benefited from a number of Polygon upgrades in the past couple of months. For instance, Polygon team announced the launch of Polygon zkEVM on July 20th. This is a layer-two scaling solution that uses zero-knowledge proofs and is fully Ethereum Virtual Machine-equivalent. In other words, it will be faster and more secure than many other scaling solutions, while it will also be compatible with a wider range of Ethereum-based applications.

We are proud to announce a giant leap forward for Ethereum scaling and ZK innovation.

By reducing fees and transaction times, the launch of Polygon zkEVM will increase usage of the layer-two network considerably. It’s already the fifth-biggest platform in crypto in terms of total value locked (having recently overtaken Solana), but with the Merge likely to increase interest in Ethereum later in the year, it could grow even bigger. This is why it’s one of our 5 best cryptocurrency to buy for the weekend rally. 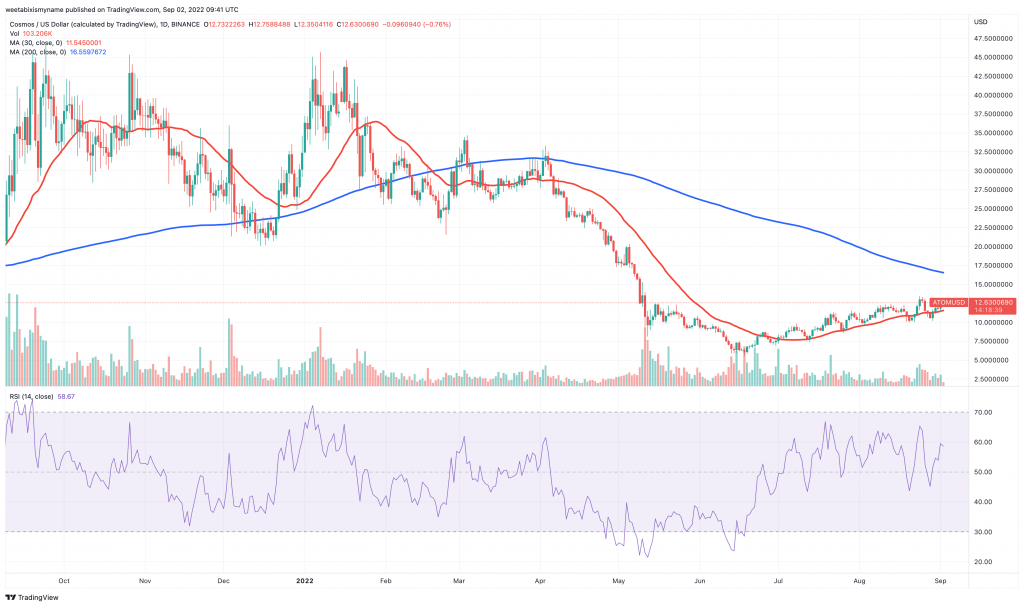 ATOM also boasts healthy indicators right now. Its RSI has risen from nearly 20 in mid-June to 60 now. At the same time, its 30-day average is evidently in the process of overtaking its 200-day. Yet it still has some way left to go before doing so, meaning its ongoing rally could continue for a while yet.

Cosmos is a blockchain platform which serves as a hub for other networks, creating an ‘Internet of Blockchains’ in the process. There’s one chief reason why its native governance/utility ATOM is rallying: the emergence of the Kujira and its USK stablecoin. Running on Cosmos, USK will be an over-collaterialized stablecoin that aims to improve on the weaknesses of Terra and other similar tokens. It’s due for launch in the coming days or weeks, having just completed its code audit.

With the cryptocurrency market and ecosystem having a big demand for reliable stablecoins, USK’s launch on Cosmos will likely increase usage of the latter considerably. This is why it has been rallying, and why it’s likely to continue doing so in the near future.

MATIC is up by 6% following Robinhood support

Stories of People Who Lost a Lot

So what if Bitcoin price keeps falling! Here is why…